Seeing Through the Sea

Sunlight entering the ocean will only travel about 200 meters below the surface before there is little to none left, leaving the deepest parts of our oceans in perpetual darkness. While these vast regions of our Earth might be out of sight, on R / V Langseth, they are neither out of sight nor out of mind, thanks to a multibeam echo sounder which illuminates down to the seafloor. This is one of the many additional geophysical datasets we are collecting while at sea that complement the controlled-source seismic portion of the expedition.

An inside look of an expendable bathythermograph tube, showing the small probe that helps us extract the speed of sound in the ocean to better constrain the water depth beneath R / V Langseth. Photo by Brian Boston

A simple sound wave would only get us one point beneath the ship, barely covering any of the seafloor, and taking significantly longer to acquire the same kind of dataset we have now. Instead, R / V Langseth’s multibeam echo sounder emits a fan-shaped acoustic wave beneath the ship and can extract directional information of the returning soundwave to produce a swath of depths with hundreds of datapoints per soundwave. Since the take-off angle of the fan is fixed at the ship, the water depth mainly determines how much of the seafloor we will spatially be able to look at. In shallower waters, the acoustic wave doesn’t have a chance to fan out as far, producing a narrower band of data points. This can be easily seen below, where we plot some of our data crossing the trench, going from about 100 meters deep near shore to more than 5,000 meters at the trench. 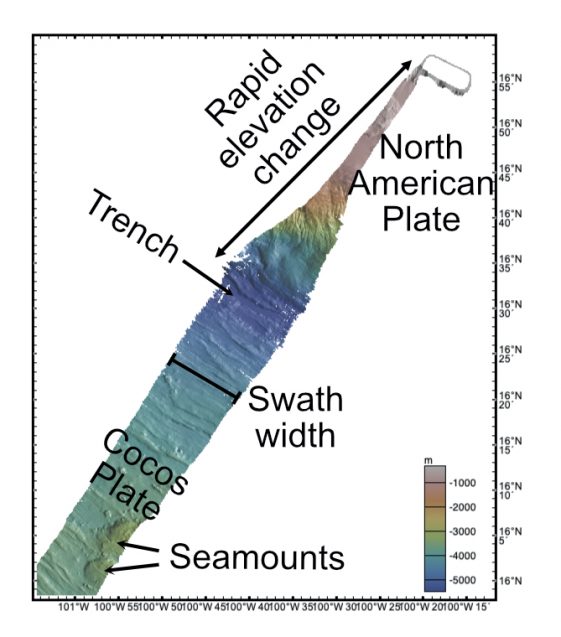 A day’s work for the Langseth’s multibeam echo sounder. The color-coded plot of seafloor depth exposes a wide section of the trench with the swath area rapidly narrowing as we entered shallower waters. The scientists aboard Langseth have been looking at every ping of the multibeam data to make sure that the data is of high-quality and to remove any unwanted noise. Figure by Brian Boston

We use the data not only to find where the seafloor is, but to help us understand the local geological processes occurring in the region. With this depth data, we can find canyons cutting through a steep forearc, the narrow trench axis, abyssal hill fabric, and seamounts littered across the seafloor. To better demonstrate how incredible some of these seafloor features are, we can take a single profile through from the trench towards shore and compare it against a terrestrial feature, such as the Andes Mountain range: 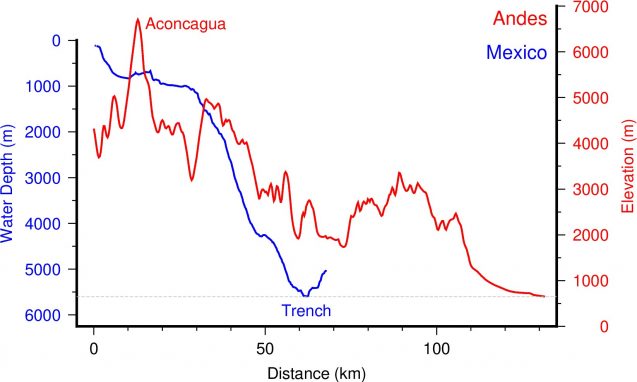 This is profile is extracted from the bathymetry in the previous image. It compares the trench from offshore Mexico (blue line) against the elevation of the Andes (red line) and across Mount Aconcagua, the highest point in the Americas, at a same relative starting point (gray line). Not only does our region offshore nearly match one of the largest mountain ranges on Earth, it reaches those heights in nearly half the distance. Figure by Brian Boston